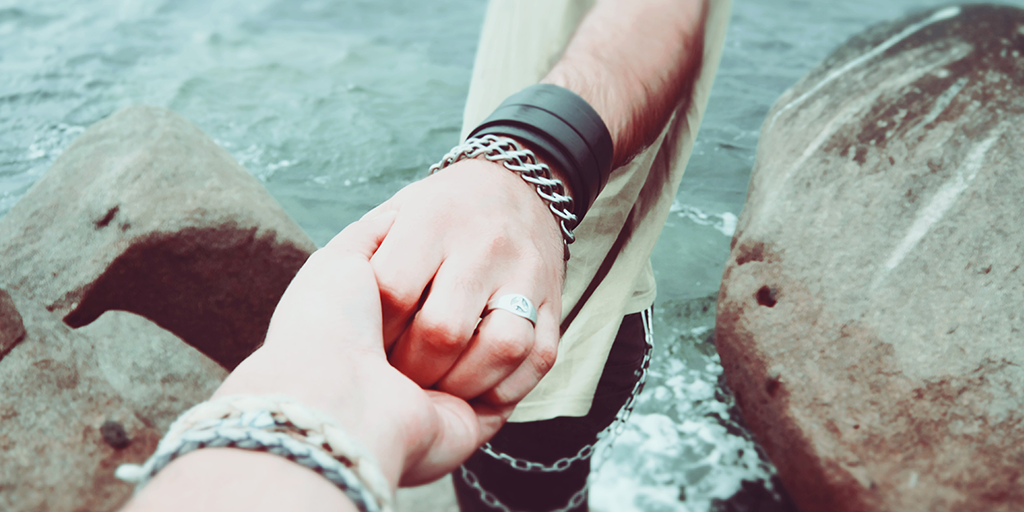 My own relationship has taught me that relationships in themselves aren’t some obstructive thing that stops you from realizing your own nature. Having said that, I lived through the often painful dropping of the attachment to my relationship with my husband Martyn. We found ourselves at an impasse after he had a spiritual awakening that in the wake of he felt he could no longer be at the ashram where we were living, and I felt I couldn’t be anywhere else. He couldn’t be there, and I couldn’t NOT be there; this resulted in us parting ways with no end to our separation in sight. When we said our goodbyes they were potentially permanent goodbyes, we didn’t have any idea if we would ever see each other again. There was immense love for one another, but our situation in life was physically parting us and it was torture.

I cried myself to sleep for the days and weeks that followed. I spent my days on the verge of crying, feeling like my insides had been ripped out. And yet there was nothing I could do other than endure it. Connection to the internet for both of us was incredibly patchy so we would maybe speak once a week, and because of the turmoil that both of us were feeling it would invariable end up in an argument – often over how to resolve the situation, or ending with an angry and frustrated, “well it’s over then!?!”.

I felt torn, I wanted to be with him, but I felt I needed to be where I was. My life appeared to be crumbling before my eyes, such strong seemingly overwhelming feelings were right at the forefront of my experience. I was suffering and I felt so alone.

The suffering that I was experiencing all came from the expectation of how I imagined or conceived the relationship ‘should be’ rather than how it actually is/was. This ‘should’ was now not being met, and the attachment to this ‘should’ was a strong one. In relationships we may not even notice that there’s attachment there, (especially if for the most part it’s been a smooth sailing healthy relationship like mine was) but there’s always a subtle fear of loss, and from this, suffering can arise. In this attachment we are either always holding on to something we have with a feeling of fear or loss, or trying to get something that we feel we lack.

It’s funny because in the wake of this or rather the flip side, I also felt a sense of strength in my new found independence. We had been together since I was 18 so it was a completely new experience to not have to worry or think about anyone else, to make decisions without referring to anyone else was a liberating feeling. So even with this turmoil there I also experienced the growth and discovery of strength that I didn’t know I had. I experienced who I was away from who I took myself to be within our relationship; who I was living prior to any labels and ideas of being a ‘someone’ to ‘somebody else’.

At the pinnacle of that torturous two months I began having ‘panic attacks’. I couldn’t deal with these strong emotions, they got the the point where it wasn’t even strong emotions, it was just intense energy coursing through my veins.  I spoke to both Martyn and the spiritual teacher at the ashram about this and both gave me pretty much the same pointing:

“Don’t give so much importance to this energy, trying to understand and work it out, just feel it. Let it pass through you. See that you are aware of all of this happening.”

I felt like I was talked down from the ledge a few times by them. But eventually the innocent observation of these strong energies led me to be able to let go of the attachment I had about being physically together. An ease came about in accepting what was (is). This was among one of the most difficult times of my life thus far, but with it came an openness and an acceptance of what was showing up in my life. I let go of any ideas of how the relationship ‘should’ be – good or bad, it didn’t matter – everything had to go.

Throughout all this upheaval I intuitively knew that what was happening was somehow inevitable; to have the attachment of the relationship torn from me. I had to accept the separation and along with it the attachment to Martyn and our wonderful relationship, for it was the non-acceptance that was causing immeasurable suffering.

It’s funny, once this attachment had given way to acceptance everything immediately shifted, and a few weeks later an opportunity for Martyn and I live in a house in the nearby village came up. And so to our complete surprise, we found ourselves once again in physical proximity when only weeks before that possibility looked lost forever. The attachment to the relationship and the shoulds and should-nots have never returned. I know that both individually and in our relationship we continue to evolve, and whatever happens – whether we stay together or not – it doesn’t hold the same neediness of attachment.

I see now what a gift it was to have this strong and intensely embedded attachment brought so clearly (and painfully) to the surface. For it was in this hard lesson of letting go that I was able to clearly recognise my essential nature, prior to all attachments, all concepts of ‘shoulds’, and all suffering.

Nothing To Hold On To